With the new information that has come out recently regarding Assassin’s Creed 3, I’ve heard quite a few people remarking that they they think it is redictulus for the main character, Connor, to be wearing a Roman assassin style outfit,  that it doesn’t fit with the Revolutionary war period the game is set in, and that you are going to be extremely conspicuous trying to blend into a 1700’s crowd.   I’ve mentioned a few times on Twitter that no, it isn’t a Roman Assassin’s garb, that his outfit is pretty normal 1700’s soldier/scout/woodsman’s garb.  So I though I would take and point out some of the details, and show why this outfit fits, no pun intended. First, let’s compare Connor’s outfit with Etzio’s outfit from the earlier Assassin’s Creed games. Now at first glance you might say that they are almost exactly the same, but stop for a moment and look closer.  One major difference that should jump out is that Etzio has a cape (draped over his left shoulder), while Connor does not.  This is a point that I have heard mention several times specifically, that you are really going to stand out since he is wearing a cape.  However, looking at these pictures, it is pretty easy to see that there is no cape, at least, not an obvious one.  To confirm that there is none, let’s take a look from behind at both characters. 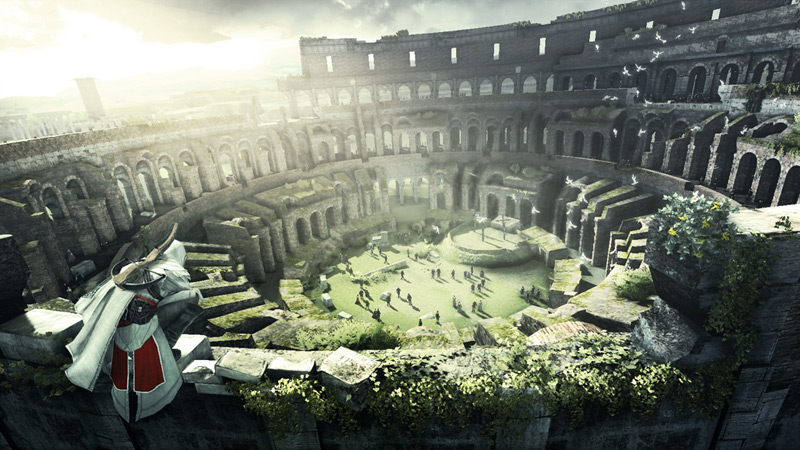 Looking at these pictures it is extremely obvious that Connor does not wear a cape like Etzio. “But what are those long tails in back from, if not from a cape?” you may ask. Those long tails are from his Capot, a knee length hooded coat.  Here is picture of a modern made one in the style from around the time of the French and Indian War.

Now his is split in the back, which would make sense from a pure practicality aspect, as it would make the jacket less encumbering when moving swiftly. In addition, according to the Assassin’s Creed Wiki, he wears a dress uniform jacket, which also explains the tails, as the majority of uniforms of that time that I have seen are of that style. He is also wearing mocassins in the winter seens, which fit a woodsman/Indian of that period. Also notice the gilet (vest) he is wearing under his coat, which is standard of that time, and from what I’ve read trappers and hunters would often wear heavier ones like that as it adds another layer to help keep the core warm in the cold. And again, every uniform I’ve seen from that time period has it.

Hopefully this helps clear up some of the confusion regarding his garb. While I’ve only played a bit of the first game so far, and am not really interested in playing 2 – Revelations, this game has really caught my attention, and I definitely want to play it.

That’s right, the Everyday Gamers Crew is back! While this is not a standard podcast for them, as in they don’t get everyone together to talk about what they have been playing and other topics, but it is new content, and it is the start of a commitment to get back to podcasting. Listen in […]

Having fun with Stu12122 in Strange Brigade